Neil Tovey (born 2 July 1962) is a South African football coach and former player who holds the record for most appearances in the National Soccer League. 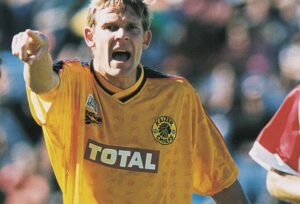 He is married to Nadine Tovey and together they have three children, Bianca, Jessica and Sheldon.

He joined Kaizer Chiefs in 1990 and took over the captaincy from Howard Freese in 1992 wearing the number 9 jersey. In the same season, Tovey got a record 52 starts which is still a record.

He was converted to defence by Philippe Troussier. He led Chiefs to cup victory scored two very important goals in the Rothmans Cup against QwaQwa Stars and Umtata Bush Bucks.

He played 341 league games for Chiefs. He played 362 matches and scored 32 goals in all competitions. In the very last match of his career and his last two touches Chiefs, colours resulted in a goal in a 5–1 win over Dynamos on 9 June 1999.

Tovey is a former player of the South Africa national football team and won 52 caps for the national side without scoring a goal. He captained the team 29 times.

Tovey coached Banyana Banyana to COSAFA Cup victory in 2002. Tovey saved Hellenic from relegation in the 2003–04 season. He got his UEFA A licence with a 90% pass in Hennef, Germany, which were the best marks since 1998. On 27 June 2015 Tovey became technical director of South Africa national football team.

Drop your queries regarding Neil Tovey Biography below in the comment box.