Nathi Mthethwa (born 23 January 1967) whose full name is Emmanuel Nkosinathi Mthethwa is a South African politician and the minister of Arts and Culture.

He served as Minister for Safety and Security from 2008 to 2014 and also as the Chief Whip for the African National Congress in the National Assembly. 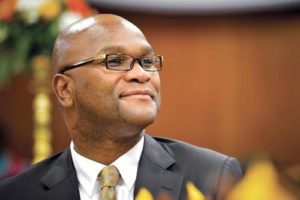 He was born on 23rd January 1967 in KwaZulu-Natal, South Africa to MaGumbi Mthethwa and Zanele Zondi-Mthethwa. As of 2021, he is 54 years old

Nathi Mthethwa got married to businesswoman Philisiwe Buthelezi in a lavish French-inspired wedding on 16 February 2013 at Alle Bleue Wine Estate in Franschhoek, Western Cape. Both of them met during an ANC conference.

They chose the picturesque venue because of Buthelezi’s love for France since she left South Africa when she was 19 and grew up there.

He has an estimated net worth of R20 million which he has earned as a politician.

Former Police Minister Nathi Mthethwa says he would have found himself in hot water had he not called for an investigation into the so-called Cato Manor death squad back in 2011.

JOHANNESBURG – Former Police Minister Nathi Mthethwa says he would have found himself in hot water had he not called for an investigation into the so-called Cato Manor death squad back in 2011.

Mthethwa, who is now Arts and Culture Minister, has admitted to having met with National Prosecuting Authority (NPA) officials at the time but says it was to merely receive feedback on the probe.

Booysens and other senior police officials were nabbed and charged with murder attempted murder and racketeering over the story which was covered by the Sunday Times and turned out to be false.

Mthethwa maintains he was being accountable as a minister when he called for the investigation.

The minister was speaking on the Karima Brown Show on Tuesday night.