Nataniël (born 30 August 1962) is a South African singer, songwriter, entertainer and best-selling author. He is best known for his solo stage act and his lifestyle and cooking TV shows. 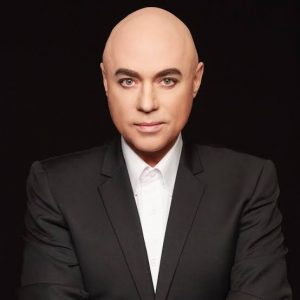 Nataniël le Roux launched his career in 1987 with the release of his first single, Maybe Time. Since then he has released fifteen studio- and two live- albums, staged more than eighty original theatre productions and published twentyone books. In 1997 he also released a four-track EP entitled The Diva Devine with opera singer Mimi Coertse. His many theatre shows, often staged at the Johannesburg casino Emperor’s Palace, won him multiple awards.Nataniël manages a company specialising in lifestyle goods called Kaalkop, which means “bald” in Afrikaans, but implies “honest” or “unpretentious”.
After starring in the TV series Another Life With Nataniël (1998-1999) and Project Fame (2004), Nataniël created and hosted Die Nataniel Tafel, a cooking and entertainment program in five seasons (2012-2014), on the South African television channel kykNET. In 2014 he starred in the South African TV drama Almon Henry which he also wrote.[9] In recent years he has created and hosted five seasons of his TV show Edik van Nantes (2015–2020) on the same channel alongside his brother, Erik le Roux.

Nataniël is a column writer for Sarie magazine since 2002, and he recently published the first part of his first memoirs.

He has an estimated net worth of $1 million which he has earned from his career as a singer, songwriter and author.