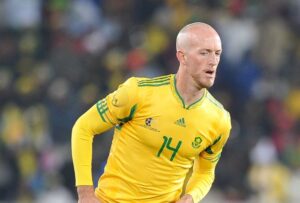 Booth was born in Fish Hoek to Paul and Anthea Booth. His father Paul was an engineer at the Cape Town city council, a semi-professional footballer and administrator for Fish Hoek AFC, while his mother Anthea was a legal secretary. Booth started playing football for Fish Hoek AFC in 1982 at the age of five.

In 1993, he played in the Bayhill U19 tournament for Fish Hoek, where he was spotted by Cape Town Spurs coach Richard Gomes, who saw a lanky youngster flying into tackles halfheartedly and towering above the opposition’s attackers and invited him to train with the club’s youth.

In 1994, shortly after he turned 17, he trained with the senior squad, which went on to win the league and the BobSave Super Bowl.

At the time, he worked at a sports shop in Woodstock and would travel by train to Parow after work to train with the team at CR Vasco da Gama fields at the time, then travelled back to Fish Hoek after training.

Booth is married to Sonia Bonneventia, a businesswoman and former model. The couple has two children together.

He was deemed surplus to requirements at Ajax and wanted to sell him to newly formed Mother City. He fought back and eventually joined Mamelodi Sundowns, staying for three seasons.

In 2001, Booth moved to England as he was loaned out to First Division side Wimbledon, but he never made an appearance for the first team and was only used in reserve team matches.

He was later quoted as saying that his stint at Wimbledon was “not a happy time because the club was in turmoil over the move to Milton Keynes”.In 2002, he moved to Russia to represent both Rostov and later Krylia Sovetov, playing with and against players such as Branislav Ivanović, Vágner Love and Jan Koller.

Booth retired from professional football on 19 June 2014, even though he was given an option to renew his playing contract.

Booth made his debut for South Africa on 20 February 1999, against Botswana at the Cosafa Castle Cup. He made thirty-seven appearances for the national side, scoring one goal.

Booth missed out on the 2002 FIFA World Cup due to a knee injury, but was a member of the 2010 FIFA World Cup team (that qualified as hosts of the competition), despite remaining an unused substitute for all three group stage matches. He also captained the under-23 side at the 2000 Summer Olympics.

Due to his height, Booth is considered one of the most important players when meeting opponents with tall players.

In 2014, Booth saved a woman from being beaten on Cape Town’s nightclub strip on Long Street early on a Saturday morning. Booth had been playing for Wits in an Absa Premiership game against Ajax Cape Town, which they lost 1–0, hosted at Cape Town Stadium on the previous Friday night.

After using an ATM and walking back to his friends, he saw a man assaulting the woman and rushed to her assistance. The attacker shoved Booth, who toppled onto a store’s window ledge which had spikes to prevent people sitting on the ledge.

Members of the Central City Improvement District took the attacker away. Booth returned to his hotel where the team doctor attended to his injuries.

Booth owns junior coaching clinics at multiple public schools. He has also done some television work for the South African Broadcasting Corporation as an analyst and some writing for The Sowetan. Booth has also registered to do a BA degree through the University of South Africa.