Markus Jooste (born 22 January 1961) is a South African businessman. He is the former CEO of furniture manufacturer-retailer Steinhoff International

He was also a former patron of South African horse racing. 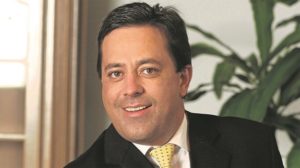 He is married to Ingrid Jooste and together they have three children; two daughters and one son.

He is married with three children, a son, and two daughters. It is believed that his wife designs the colors worn by Jooste’s racehorses.