Jackson Mthembu (born on June 5, 1958, in Witbank) was a South African politician. He was a former national spokesperson for the African National Congress. 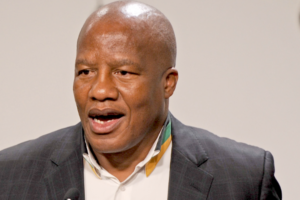 He is married to Thembi Mthembu, with whom he has six children.

He has two daughters; Thuli and Khabo and four sons. His eldest daughter, Khwezi Mthembu committed suicide at the tender age of 25 on the night of the 19th of March 2019.

He attended Elukhanyisweni Secondary School in Witbank and served as a student leader during the Soweto Uprising in 1976.

Jackson attended the University of Fort Hare but later received an expulsion letter from the school.

He had an estimated net worth of $1 million to $5 million which he has earned from his political career.

The eldest daughter of ANC chief Jackson Mthembu has committed suicide, her hurting father has disclosed.

Mthembu tweeted on Wednesday morning that his daughter, Khwezi Mthembu, took her life at their Pelican parliamentary village home in Cape Town.

“We don’t know what led her to take her own life at such a tender age of 25 years.”

Mthembu has previously expressed his devastation by his firstborn son who was addicted to drugs.

In 2011, he opened up about his son’s drug addiction during a radio interview and said he had sent him to several rehabilitation centres without success.

In an interview with 702 Mthembu said his son had been treated at least six times at addiction centres, and through counselling, they had learned that his son had become an addict while in Grade 7.