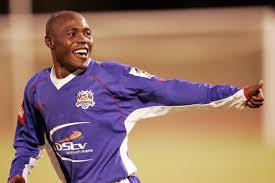 He played most of his career in Orlando Pirates having played also for FC Porto and Selangor of Malaysia.

Zwane signed for FC Porto in 1994, but never made a Portuguese Liga appearance for the club, instead of going on loan to F.C. Penafiel.

He was capped once for South Africa.

Drop your queries regarding Mandla Zwane Biography below in the comment box.