Lindiwe Zulu (born 21 April 1958 in Mpumalanga) is a South African politician and the current Minister of Small Business Development.

She was a student of St Theresa’s and Mjingo schools after which she attended the Swaziland Cooperative Development College in Ezulwini.

Lindiwe then joined the African National Congress( ANC) and later moved away to Mozambique.

She attended the Solomon Mahlangu Freedom College, SOMAFCO, in Mazimbu, Tanzania. After she got a scholarship to study journalism in the USSR, she bagged a master’s degree in Journalism.

In 1987, she went to Angola for full military training with the Pan Africanist Women’s Organisation. 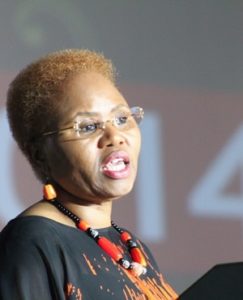 She is currently married to Kgosietsile Itholeng.

Together with her husband, she has four children two daughters Nokuthula and Phindile and two sons Sipho and Boitumelo.

Her email address is; [email protected]

Drop your queries regarding Lindiwe Zulu Biography below in the comment box.