Kagiso Rabada, popularly known as KG, is a South African international cricketer who plays domestic cricket for the Highveld Lions. He is a fast bowler and plays all formats of the game. 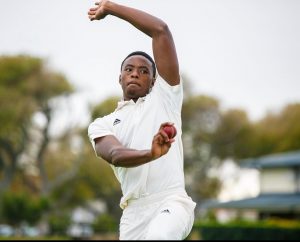 The young cricketer stands at a height of 1.85m.

His parents are Mpho and Florence Rabada. His father is a doctor while is mother is a lawyer.

The South African international is currently single and doesn’t have a girlfriend right now.

He grew up in Gauteng’s Mamelodi and Johannesburg’s West Rand me. Kagiso started his sports career by playing Rugby for his school team. Then after the offseason of Rugby, he started playing cricket.

He decided to quit Rugby and focus solely on cricket after he was ignored by the respective selectors of the A level cricket team and the Rugby team.

He won a sports scholarship from St. Stithians where he improved his skills and started playing age-level cricket.

He schooled at St Stithians Boys College and matriculated in 2013.

December 2013: Rabada made his debut for the Gauteng in the CSA Provincial One-Day Competition against Border.

February 2014: Rabada represented South Africa’s Under-19 side for the 2014 ICC Under-19 Cricket World Cup.  He was named the the fastest and most feared bowler in the competition.

February 2015: Rabada took a record 14 wickets in a match for Lions against Dolphins, including 9 for 33 in the second innings. His 14 for 105 are the best figures in the franchise era of South African cricket.

February 2016: He signed a short-term deal to play county cricket for Kent County Cricket Club in June and July of the English domestic season.

February 2017: Rabada was bought by the Delhi Daredevils team for the 2017 Indian Premier League for INR 50 million.

January 2018: He was bought again by Delhi (Delhi Capitals) in the 2018 IPL auction but was later ruled out of the season due to a back injury.

October 2018: He was named Jozi Stars’ squad for the first edition of the Mzansi Super League T20 tournament.

September 2019: He was named in the squad for the Jozi Stars team for the 2019 Mzansi Super League tournament.

November 2014: Rabada made his T20I debut for South Africa against Australia

July 2015: He made his One Day International debut for South Africa against Bangladesh.

November 2015: He made his Test debut for South Africa against India.

2016: He had his first ten-wicket haul in a Test match against England during the 4th Test at Centurion.

2017: His second ten-wicket haul came in against Sri Lanka.

— Rabada took 4/39 in the third ODI match of the South African tour in England in. Following his performance in the match, Rabada became top ranked ODI bowler in the world and the youngest player (aged 22) to top the ODI.

July 2018: During the first test against Sri Lanka, Rabada surpassed the record of Harbhajan Singh to become the youngest ever bowler to take 150 wickets in Test cricket and also became the third fastest South African to reach 150 test wickets in terms of matches (31).

March 2019: Rabada took his 100th wicket in ODIs in the second ODI against Sri Lanka.