Judy Dlamini (born 10 July 1959) is a South African businesswoman and author. She is also the founding chairman of Mbekani Group and the Chancellor of the University of the Witwatersrand.

She is a qualified medical doctor, accomplished businesswoman with an MBA and PhD in business leadership, and author. Judy is one of the richest black women in South Africa. 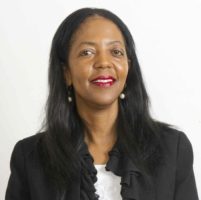 She is married to Sizwe Nxasana who is a businessman and former CEO of FirstRand.

He is the co-founder of the Sifiso Learning Group and holds a record as one of the first black chartered accountants in South Africa.

She later attended the University of Witwatersrand, Wits, where she bagged an MBA. Judy in 2014 obtained a Doctor of Business Leadership, University of South Africa. She earned the Innovation and Entrepreneurship Certificate, Stanford University in 2018.

She has published two bestselling books which are Equal but Different and The Other Story.

She is believed to have an estimated net worth of about R124 million making her one of the richest women in South Africa.