Nondumiso Tembe is a South African actress, singer, songwriter, dancer and author. She is famous for her roles in popular movies and TV series including NCIS and Avengers II – Age of Ultron. 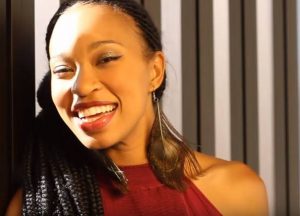 Her parents are South African opera singers,  Linda Bukhosini and Bongani Tembe. She spent her early childhood in New York City, while her parents studied music at the Juilliard School.

Nondumiso began performing in opera and theatre around the age of 6. Being the daughter of two opera singers, she describes herself as having “grown up in the wings”.

The family returned home to South Africa when Nondumiso was 10 years old, at the end of Apartheid. At 17 she returned to the Big Apple on her own, to study Musical Theatre at the American Musical and Dramatic Academy.

Tembe studied Musical Theatre at the American Musical and Dramatic Academy. She holds a Bachelor of Fine Arts in Theatre and Political Science with a focus on Africa from New York’s New School University, and a Masters of Fine Arts in Acting from the Yale School of Drama.

She studied classical theatre at the British American Dramatic Academy at Oxford University in England and has studied Ballet and African dance at the Alvin Ailey American Dance Theatre and Djoniba African Dance and Drum Center in New York City.

Tembe came into spotlight when she played the title role in Durban Playhouse Company’s widely acclaimed production of Annie, a performance that lead her to be the first black actress to lead a multi-racial cast in a major theatrical production in post-Apartheid South Africa.

She received much attention for originating the roles of Maria and Thobile in the original South African musicals Leopard Skin and Mata-Mata, respectively.

Her favourite roles include her portrayal of Josephine Baker in a New York production and Mercutio in a provocative all-black production of Romeo and Juliet at Yale. She also enjoyed a summer performing at Princeton’s reputed McCarter Theatre.

She also sang for Nelson Mandela’s 90th birthday celebration at his home in Qunu, South Africa.

Now based in Los Angeles, pursuing a career in film and television, along with her music, Nondumiso appeared on NCIS: LA.

In January 2011 she released her debut album IZWI LAMI; My Voice, as well as Boston Court Theatre’s production of the new African musical Witness Uganda in Los Angeles, in which she portrays a ferocious Ugandan woman who runs an orphanage.

In December 2013 she made her debut on Generations in the role of Phumelele Miya, a fashion executive raised in New York.

Tembe has an estimated net worth of $300 000 which she has earned from her successful career.