Hlompho Kekana (born 23 May 1985) is a South African footballer who plays as a defensive midfielder for Mamelodi Sundowns. He is known as the engine of the club.

He is popularly known for his 65-yard goal which he scored against Cameroon. The goal got him nominated for the FIFA Puskás Award. 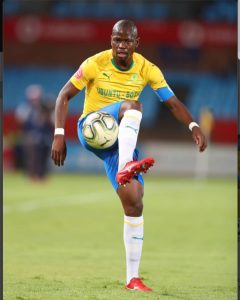 Kekana is married with a wife and daughter. Not much is known about his marriage.

The South African midfielder made his international debut in 2011. He has since the appeared 24 times for the national team scoring five goals as of 2018.

His goals for the national team have come against Namibia, Lesotho, Mozambique, Cameroon and Mauritania.

He is widely regarded as one of the best long-range shooters in the world.

Kekana made his debut in the South African top-flight in 2004 with Blacks Leopards. He had his youth career at Zebediela Junior Swallows and Tshiamo Soccer Academy.

The Mamelodi Sundown skipper recently received a sizzling new Golf R worth over R700 000 from Volkswagen. Kekana also recently signed a new contract with Sundowns extending his stay at the club by another five years.

Drop your queries regarding Hlompho Kekana Biography below in the comment box.