Busisiwe Mkhwebane (born 2 February 1970) is a South African advocate who currently occupies the position of the public protector of South Africa from 2016.

She was appointed by former President Jacob Zuma. 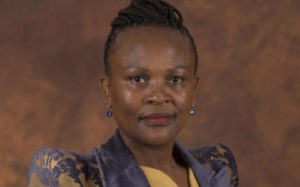 Busisiwe Mkhwebane was born in Bethal, Mpumalanga, South Africa on the 2nd of February 1970. She is 51 years old as of 2021.

In 1988, Busisiwe Mkhwebane rounded up her secondary school education at Mkhephula Secondary School.

She later attended the University of Limpopo (formerly called University of the North) were she graduated with a BProc and also an LLB. subsequently.

She subsequently obtained a diploma in corporate law and a higher diploma in tax from the University of Johannesburg (formerly Rand Afrikaans University).

She obtained a Masters degree in Business Leadership at the University of South Africa in 2010.

In 1994 Mkhwebane joined the Department of Justice as Public Prosecutor and consequently became the Legal Administrator Officer at the International Affairs Directorate in 1996.

She joined the South African Human Rights Commission as a Senior Researcher in 1998 and then a senior Investigator and acting provincial representative at the Public Prosecutor’s Office in 1998.

In October 2016, she was appointed Public Protector. She has also served as a board member for the Refugee Fund, where payments for financial assistance are made for refugees in distress.

She serves as the Director of Business Development at lyanilla Bricks.  Here is a summary of the professional positions she has held: