Bruce Bvuma (born 15th of May 1995 in Leratong) is a South African footballer who currently plays as a goalkeeper for PSL club Kaizer Chiefs. 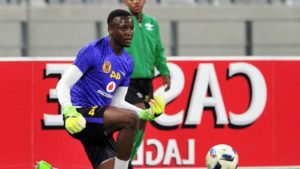 He has an estimated net worth of $100,000 which he has earned as a footballer.

Drop your queries regarding Bruce Bvuma Biography below in the comment box.