Bradley Grobler (born 25 January 1988) is a South African footballer who plays as a forward for SuperSport United and the South African national team.

He attended Benoni High School and started as a junior at both Boksburg FC and BK Callies which is just outside Johannesburg. He is the son of former Moroka Swallows player Les Grobler. 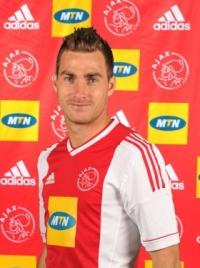 His professional football career started at Platinum Stars. After spending four years at Stars, he moved to Turkish second division side Göztepe A.Ş. on 26 August 2011. He became Göztepe’s most expensive signing ever at that time.

On 26 June 2012, he joined Premier Soccer League side Ajax Cape Town on a four-year deal. While at Supersport United, he has scored over 8 goals against Orlando Pirates.

In early September 2019, he signed for Forest Green Rovers on a free transfer. He scored 15 goals in only 9 league games during his short time at the club, helping Rovers to top the League Two table before Christmas without dropping a single point.

Grobler scored on his international debut against Zimbabwe on 15 November 2011.