Barbara Creecy (born 17 June 1958) is a South African politician who currently serves as the Minister of Environment, Forestry and Fisheries. She was appointed minister by President Cyril Ramaphosa on 29 May 2019. 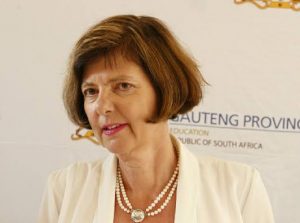 Creecy is divorced and has two from her previous marriage.

Creecy is one of the longest serving Members of the Provincial Legislature. She joined the legislature in 1994, and until 2004, served in different portfolios including Deputy Chief Whip as well as Chairperson of the Social Development and Education Committees.

In 2004 she was appointed MEC for Sports, Recreation, Arts and Culture. After the General Elections in 2009, she moved to the Education portfolio.

Following the May 2019 elections, Creecy took office as a Member of the National Assembly. The media speculated that she would be appointed to the National Finance Department, as either Minister or Deputy Minister.

On 29 May 2019, President Cyril Ramaphosa appointed her to the post of Minister of Environment, Forestry and Fisheries.

Creecy has an estimated net worth of $500 000 which she has earned from her successful career.

Drop your queries regarding Barbara Creecy Biography below in the comment box.