Thembi Mtshali-Jones (born 7 November 1949) is a South African actress who is considered as one of South Africa’s most celebrated artists.

Thembi is notable for the roles in the several popular television serials including Sgudi ‘Snaysi, Stokvel, Silent Witness and Imbewu.

Apart from acting, she is also a renowned singer, playwright and Associate Teaching Artist at Global Arts Corps in Kosovo as well as a trainer in Cambodia. 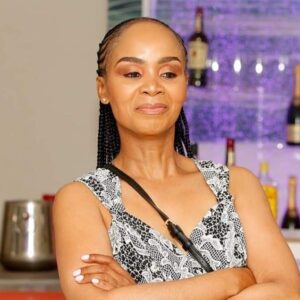 She was born on the 7th of November 1949 in Vrede, Free State. As of 2020, she is 71 years old and celebrates her birthday on November 7th every year.

She was born on 7 November 1949 in village Sabhoza near Ulundi, Durban, South Africa. Her parents divorced soon after her birth. She later grew up in KwaMashu Township where she completed education. During school times, she got pregnant and therefore forced to leave school.

In 1998, she had a residency at the Gallaudet University in Washington DC, USA and later at the University of Louisville, the USA in 2004.

With the contribution to the field of art, she was made an Honorary Citizen of Louisville by the Mayor and received a vote of thanks by the Kentucky Senate. Later the Governor of Kentucky gave her the title Honorary Kentucky Colonel, the highest honor in Kentucky.

She has one daughter, Phumzile from her first marriage which ended with a divorce. Later, she was married to Emrys Jones, who was 10 years younger than Thembi.

She met Emrys, when he came to watch Thembi’s one-woman show A Woman in Waiting. They had eight months affair and finally got married. Emrys worked as a business analyst for a London-based oil company. They lived together for 17 years until he died in 2016 following a heart attack.

Her acting talent was discovered by Welcome Msomi where Thembi performed in his original Umabatha. She then joined the ‘Musical Ipi Tombi’, and became the lead female as ‘Mama Tembu’. She made several international tours including the West End and Broadway. Later she went to the USA for uplift her musical career where she met popular musicians Hugh Masekela and Miriam Makeba. They toured Europe and Africa for several years. In 1987, Thembi returned to South Africa and joined the Market Theatre. At the theatre, she got the opportunity to work with Janice Honeyman in Black And White Follies.

Since the 1970s, she performed in stage for a number of plays. With Gcina Mhlophe and Maralin Vanrenen, she co-wrote and performed the stage play Have You Seen Zandile. She won a Fringe First at the Edinburgh Festival Fringe for her role in that play. With that success, she then co-wrote the play Eden and Other Places and Women of Africa with Barney Simon.

Meanwhile, she toured the UK and USA with the Malcom Purkey’s musical ‘Marabi’. In 1998, she got the privilege to sing “Happy Birthday” song for then-president Nelson Mandela on his 80th birthday in Washington DC. The song was broadcast live on CNN.

However, she became popular with the 1986 television sitcom Sgudi ‘Snaysi with the role ‘Thoko’. In 1988, she made her maiden cinema appearance as the female lead in Mapantsula. The film awarded as the Best New Film at the Cannes Film Festival in that year. In 1999, she co-wrote the one-woman play A Woman in Waiting. The play was based on Thambi’s real life and it was played at Joseph Paps Theatre in New York. The play later won the Fringe First at Edinburgh Festival.

In 2001, the play was played in New Ambassador Theatre, London and later in South Africa, Tunisia, Canada, the US and Bermuda Island. In 1999, Thembi won Best Actress Award at The Carthage Festival in Tunisia. She later made a radio version of the play for BBC 4, and won Sony Gold Award in 2002.

In 2002, she joined with the television sitcom Stokvel with the role ‘Hazel’. She was later nominated for International Emmy Award in 2004 for this role. In 2002, she was nominated in the category of African Excellence in Entertainment & Arts at Tribute Achievers Awards Ceremony.

In 2006, Thembi joined with the international production Truth In Translation directed by an American director Michael Lessac. The play was opened in Rwanda and has later performed in the US, Europe and Africa as well as at Baxter Theatre Centre in 2007. In 2009, she received Lifetime Achievement Award of City of Durban and the KwaZulu-Natal Province. She then received a Lifetime award from Arts and Culture Trust in 2015.

In November 2019, Thembi was honoured with The Living Legend Award at National Black Theatre Festival in North Carolina, USA to distinguish her service to South African cinema.

In the same year, she starred in the critically acclaimed production Mother to Mother at National Black Theater Festival. The play was based on a novel by Sindiwe Magona. Magona later wrote the biographica book ‘Theatre Road: My Story is an inspiring account of Thembi Mtshali-Jones’, which was released to coincide with Mtshali-Jones’ 70th birthday.

She has an estimated net worth of about $500,000 which she has earned as a actress.