Suzy Eises is a Namibian saxophonist, composer, and educator who hails from the diamond mining town of Oranjemund.

She has shared the stage with musicians such as Jimmy Dludlu, Ringo Madlingozi, and Hugh Masekela. 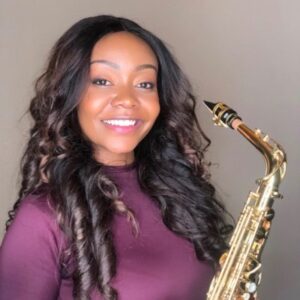 She attended a one-year course at the London College of Creative Media in England and attended two years of college studying music at Brigham Young University-Idaho in the United States of America.

Suzy obtained a Higher National Certificate of Merit in Music Performance from the London College of Creative Media and an Advanced Music Diploma of Distinction from Shaw Academy, UK.

She has appeared in a music video for a collaboration song with Gazza which appears regularly on the international television channels, Trace Africa TV, and has reached more than 500 000 YouTube views.

She is also a favorite performer for the President and First Lady of Namibia. Suzy Eises has appeared on the BBC News television and social media networks sharing her story and showcasing her work.

She regularly performs at corporate and public events all over Namibia. In Feb 2018, Suzy represented Namibia and performed at the International Music Festival organized by the Musical Bridges Around the World (MBAW) organization in San Antonio, Texas, USA.

Suzy Eises has also represented Namibia at the Africa Day celebrations in Dar es Salaam, Tanzania, 25 May 2018, and at Le Wine Chambre in Johannesburg, South Africa in August 2018. Her debut self-titled album was released in November 2017.

This earned her six nominations at the 2018 Namibian Annual Music Awards, and she went on to receive the coveted Best Album of the Year and Best Newcomer Awards.

In 2019, Suzy Eises studied Jazz at the London College of Creative Media and recorded a piece of music with BAFTA award-winning, Oscar-nominated composer George Fenton at the famous Abbey Road Studios in London where Sam Smith, Ed Sheeran, and the legendary Beatles have recorded – in May she became the first Namibian musician to record at the legendary studios.

She has an estimated net worth of about $100,000 which she has earned as a saxophonist.