Sindisiwe Chikunga whose full name is Sindisiwe Lydia Chikunga is the Deputy Minister of Transport and has also been a member of Parliament of the Republic of South Africa since 2004. 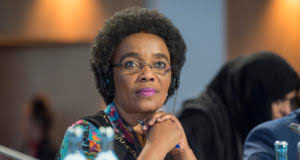 Information about her age will be added soon.

She has served as a whip for ANC from 2007 to 2009 and has been the Deputy Minister of Transport of the Republic of South Africa from 12 June 2012.