Moshe Ndiki (born 9 March 1987) is a South African comedian, actor, television presenter and YouTuber. He is popularly known for the funny content he posts on YouTube. 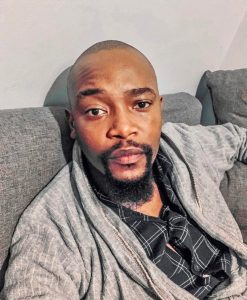 He obtained a Bachelor of Arts degree in Professional Acting for Camera from the City Varsity.

Ndiki is engaged to singer Phelo Bala of the Bala Brothers. They got engaged in September 2019. Moshe Ndiki came out to his father as gay in 2018 over WhatsApp. Moshe revealed that his father’s response made him cry as he had never come out to him before.

So I tricked my dad and told him about ” my boyfriend ” 🤣🤣🤣 we have never really spoke about dating and me being Gay. So I was just testing the waters 🤣 and this was his reply 😭😭😭😭😭❤️❤️

His rise to fame came in 2015 following his viral videos themed around poverty and unemployment. In January 2016, he was a guest continuity presenter on MTV Africa for five days.

He was also a commentator on the fourth season of the Vuzu Amp countdown show 10 Over 10. In November 2016 he began co-hosting the Vuzu Amp late night youth talk show The V-Table, with Nomuzi Mabena and Larry Mncube-Nhlane.