Mbongeni Ngema (born 1 June 1956) is a South African writer, lyricist, composer, director, and theatre producer, born in Verulam, KwaZulu-Natal (near Durban). He started his career as a theatre backing guitarist. 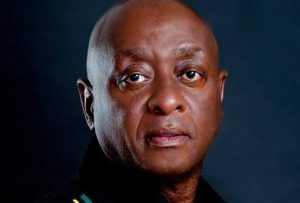 He was previously married to actress Leleti Khumalo, who received a 1988 Tony Award nomination for Best Actress in a Musical for Sarafina!, as well as starring in the leading role in South Africa’s first Oscar-nominated film Yesterday.

Born in Verulam and raised in the heart of Zululand, Mbongeni Ngema has distinguished himself as a renowned playwright, screenwriter and librettist. He is best known as the Writer of the internationally acclaimed and award-winning musical Sarafina!, which was nominated for five Tony Awards, and later nominated for the prestigious Grammy Awards. The musical won 11 NAACP Image Awards enjoyed a two-year run on Broadway, toured the US, Europe, Australia and Japan and was later adapted into a feature film starring Whoopi Goldberg, Leleti Khumalo and Miriam Makeba.

Ngema has had a string of blockbusters that include his award-winning and internationally revered Woza Albert, Township Fever (1990), which travelled from the Market Theatre to the USA the Brooklyn Academy of Music’s Majestic Theatre; Mama (1995), Asinamali (1996), Maria Maria (1997), The Zulu – the musical (1999), 1906 Bhambada The Freedom Fighter, The House of Shaka (2005) and The Lion of the East (2006).

In 1998, Ngema was inducted in the New York “Walk of Fame” in front of the Lucille Lortel Theatre in Manhattan, New York City, as one of the revered Writers of the 21st century. In 2001 during the African Renaissance festival, his name was engraved on the entrance of the City Hall in Durban alongside those of Nelson Mandela, Oliver Tambo, Miriam Makeba and other heroes of the liberation struggle.

Several books and academic work have been written about Mbongeni Ngema and his celebrated works, including Nothing Except Ourselves by Laura Jones (USA), The Best of Mbongeni Ngema, The man and his music by Isabel Cooke (RSA), An investigation into the creation and interpretation in Mbongeni Ngema’s intra-cultural Theatre – N. O. Sabelo (UKZN Thesis).

Ngema has tapped into his own richly-nurtured background of traditional story-telling, learned as a small child from his great-grandmother, to create his spell-binding one-man show, which melds memories of his childhood, spent in the heart of Zululand, with the wealth of his heritage, bringing vividly to life the historic panoply of the Zulu nation. The Zulu continues its triumphant tours of South Africa, filling theatres around the country, and is set to soon tour abroad.

Ngema prides himself on being from the lineage of the warriors Mbandama and Sigcwelegcwele kaMhlekehleke of the Ngema clan who led the Ingoba Makhosi regiment, a pivotal regiment that defeated the British armies at the Battle of Isandlwana in the Anglo-Zulu war, on 22 January 1879.

To add to the growing list of accolades, Ngema has recently been conferred with an honorary doctorate from the Good Shepherd College of Religion, Culture and skills training. This prestige was in honour and recognition of Ngema’s service to South African music and on-going impact in the arts sector. Ngema was recently the recipient of a prestigious Life Time Achievement Award, presented to him at the Naledi Awards ceremony held in Johannesburg in 2014.

Ngema has an estimated net worth of $2 million which he as earned from his successful career.

Drop your queries regarding Mbongeni Ngema Biography below in the comment box.