Manqoba Mngqithi (born 25 April 1971) is a South African football coach who is the current manager of Mamelodi Sundowns in the Premier Soccer League. 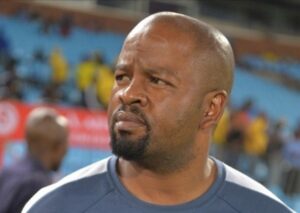 He is married, though much information is not known about his wife as he prefers keeping his personal life private.

He has a daughter named Asavela Mngqithi who is a South African actress currently starring in the South African series, Isibaya in which she plays the role of Ntwenhle.

He began his coaching career in 2006 and has since managed several South African Premier Soccer League teams. He guided Golden Arrows F.C to win the MTN 8 Cup final in 2009, defeating Ajax Cape Town 6-0.

He began his coaching career with Golden Arrows in 2006 and served as their manager for four years before leaving to take over the reins at AmaZulu. He only stayed with the team for a year before leaving in 2011 due to personal reasons.

He was soon hired by Chippa United’s board of directors to lead their staff, but he only stayed for one season before leaving in 2013. After 7 years as the club’s assistant manager, he was appointed head coach of Mamelodi Sundowns in 2020.

He has an estimated net worth of $700,000 which he has earned as a football manager.

Drop your queries regarding Manqoba Mngqithi Biography below in the comment box.