He is best known for his roles on the television comedy talk show Phat Joe Live, Pure Monate Show, and Dinner with the President.

He is the co-creator and anchor of the television series Late Nite News with Loyiso Gola on e.tv and eNCA. 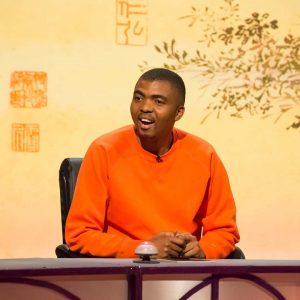 Gola attended Zonnebloem Nest Senior School in Woodstock after leaving Gugulethu at the age of 14. He matriculated in 2002, the same year he won the Sprite Soul Comedy Tour.

His career started right from high school performing with the Cape Comedy Collective at the age of 17. He has since then progressed and performed on big stages all over the world.

His television career began with appearances on SABC 1 in the Phat Joe Live talk show in 2002, and Pure Monate Show in 2003.

In 2007 he became the co-host of the SABC 2 Dinner with the President talk show created by Pieter-Dirk Uys, playing the role of the black grandson of the satirist’s alter ego Evita Bezuidenhout.

In 2010 he became the host of the Late Nite News satirical series he co-created with fellow comedian Kasigo Lediga.

Drop your queries regarding Loyiso Gola Biography below in the comment box.