Kwesta (born 11 August 1988) whose real name is Senzo Mfundo Vilakazi is a South African rapper and songwriter signed to his own media company known as Rap Lyf.

He attended Phumulami secondary school for 3 years and later Alafang high school. His Independent company was co-founded with Kid X.

At the age of 16, he dropped out of high school to pursue his music career. On the 26th of February, his third studio album DaKAR II was released. 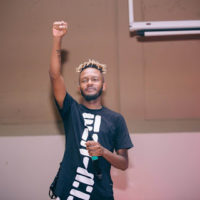 His wife is known as Yolanda Vilakazi, who had been his longtime girlfriend for over six years as of March 2017.

Together they have a daughter named Khai, who was born on 13 October 2012.

The Katlehong-born rapper fortified his marriage vows with his wife, Yolanda Vilakazi, at a private ceremony that was attended by his family and close friends.