Keke Mphuthi (born 16 February 1991) is a South African actress known for her role as Lesego in Showmax’s hit series “Unmarried”. 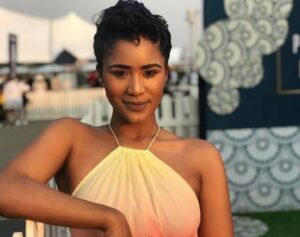 Not much information is known if she is in any relationship as she prefers keeping her personal life private. All we know for now is that Keke gave birth to a baby boy in 2019.

Keke left her home hometown for Johannesburg further her studies and pursue her career in acting. She worked as a choreographer and featured in the music videos of top South African music artist like Cassper Nyovest and ZuluBoy.

Fortunately for her, she got a guest-starring role in an episode of eKasi: Our Stories which is an e.tv anthology series. In 2017 she made a number of appearances in local shows such as iNumber Number where she played the recurring role of Kate.