Indigo Stella (born 12 November 2000) is a fast-rising South African rapper and singer who came into limelight after releasing her hit single “Boss Up”. 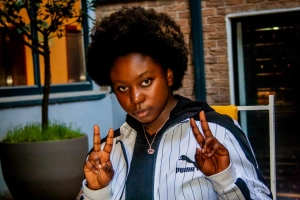 Her growing up was filled with listening to lots of hip hop and pop music and she got so many inspiration from top music stars which include the likes of Eminem, Lil Wayne, Tory Lanez, DEJ Loaf, Drake, Swae Lee.

She gained some South African attention at the age of 14 after releasing her debut single “Flexin”. This was followed up with two singles titled “Trends” and “Hate Then”.

In 2019, the fast-rising rapper got signed to Mi-Stro records in and released her first single “Boss Up” under her new record label.

She has an estimated net worth of around $50,000 which she has earned as a rapper.