Dumi Mkokstad (born 7 May 1992) is an award-winning South African gospel musician and producer. His real name is Mdumisenzi Nzimande and he was born in Pietermaritzburg in South Africa. 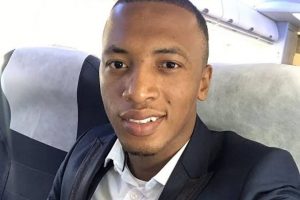 He is married to his long-time girlfriend, Ziphozenkosi Mthembu. The couple has known each other since when they were very young and have kept their friendship strong since then. They tied their knot on June 6th, 2019.

Mkokstad started his music career at the early age of 9. He used to sing with his two brothers, his sisters and his father at the openings of stores and at funerals where they lived in Mount Ailif in Kokstad. While singing at a funeral he was discovered by a local music promoter, Hamilton Kubashe.

He launched his debut album titled ‘Dumi Mkokstad’ back in 2003, which propelled him to stardom in later years. In 2010, he began enjoying even more success after joining Big Music.

Over his glittering career, he has worked with the likes of the Jaziel Brothers, Hlengiwe Mhlaba, Bethusile Mcinga, and others.

Mkokstad has been able to make a living from his career as a musician and producer. He has an estimated net worth of $400 000.

Drop your queries regarding Dumi Mkokstad Biography below in the comment box.