Darren Keet (born 5 August 1989) is a South African football player that plays as a goalkeeper for OH Leuven in the Belgian First Division.

He made his PSL debut with the Students in 2008 and established himself as the club’s number one goalkeeper.

Keet made 54 league appearances for the club until he signed for the Belgian club KV Kortrijk in June 2011 on a four-year contract. 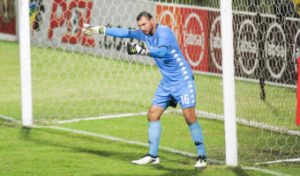 Details about his wife are not known but we do know that he has a wife and son after stating he wants to go outside South Africa with them.

Keet made his international debut for South Africa in a friendly against Zimbabwe at Orlando Stadium on 10 September 2013. He started and played the full 90 minutes in a 2–1 loss. Before the match, he told that he wanted “to prove my worth to South Africa”.