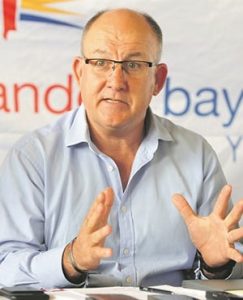 He attended Woodridge College, and studied Agricultural Management at the University of Natal in Pietermaritzburg.

He got married to Janine Handley on 5 November 2016 at Kasouga and has two children.

In 1980, Trollip became a member of the liberal Progressive Federal Party. In 1995, he began his political career as a city councillor for the Democratic Party, the successor of the PFP.

In 1998, he was elected provincial chairperson, and in 2002, he was chosen head of the rebranded Democratic Alliance in the Eastern Cape, a position he held for 15 years. Between 1999 to 2009, Trollip was a member of the Eastern Cape Provincial Legislature.

On April 13, he was declared as the DA’s candidate for Mayor of the Nelson Mandela Bay Metropolitan Municipality in the 2016 Local Government Elections, and in May, he was elected as the party’s Federal Chairperson.

Drop your queries regarding Athol Trollip Biography below in the comment box.