Zozibini Tunzi (born 18 September 1993) is a South African model and beauty queen who was crowned Miss Universe 2019 at the Tyler Perry Studios.

She was crowned the winner on the 8th of December, 2019 in Atlanta, Georgia, the United States. This makes her the third woman from South Africa to win the title.

Zozibini, on the 9th of August, 2019, had beaten 15 other beautiful young women to win the Miss South Africa 2019 crown taking over the reign from Tamaryn Green. 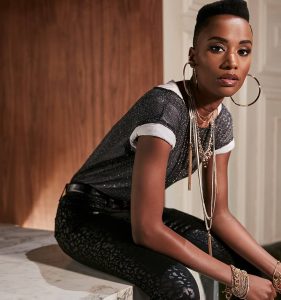 She graduated with a Bachelor’s degree in Public Relations and Image Management from the Cape Peninsula University of Technology in 2018.

She also worked as a graduate intern in the public relations department of Ogilvy Cape Town.

She was born to Philiswa and Lungisa Tunzi, both of which are in the education system.

Her mother is a school principal in an Eastern Cape village called Bolotwa while her father works at the Department of Higher Education and Training in Pretoria.

Zozibini Tunzi’s pagentry career began in 2017 when she was accepted as one of the top 26 semifinalists for Miss South Africa 2017. She however, did not make it to the final twelve.

She received a cash prize of R1 million, a new car, and a fully furnished apartment in the Sandton neighbourhood of Johannesburg, which is valued at R5 million to use during the period of her reign.

Zozibini Tunzi went on to represent South Africa at the Miss Universe 2019 which held at the Tyler Perry Studios in Atlanta, Georgia, the United States.

This makes her the third woman from South Africa to win the title, and the first black woman since Leila Lopes was crowned Miss Universe 2011.

Tonight a door was opened and I could not be more grateful to have been the one to have walked through it.
May every little girl who witnessed this moment forever believe in the power of her dreams and may they see their faces reflected in mine.
I am #MissUniverse2019. pic.twitter.com/gMkjmVCabo