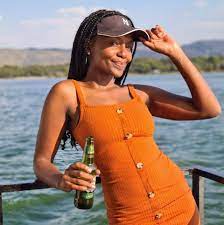 She first studied at The National School of the Arts in Washington, D.C. She earned a Bachelor’s Degree Honours in Dramatic Art from the University of the Witwatersrand in 2010.

She got married to her longtime partner and fellow actor Lebogang Mphahlele in September 2018.

Prior to her part in Room 9, she had appeared in a few films, including the television drama series The No. 1 Ladies’ Detective Agency (2009) and the 2012 film Fanie Fourie’s Lobola, in which she played Baone Magasane.

She also starred in the drama series Justice for All and hosted a SABC2 instructional show.

Dlomo has also been in a number of theatre plays, including James Ngcobo’s The Hill and You Fool, How Can the Sky Fall?, as well as Leila Henriques’ Yerm and Sarah Matchett’s Anowa.

Drop your queries regarding Zethu Dlomo Biography below in the comment box.