Tumelo Kepadisa (born 2 May 1981), simply known as Tuks or Tuks Senganga is a South African Motswako rapper born in Mafikeng, in the former homeland of the Bophuthatswana.

He frequently performs in ethnic languages, though mostly Setswana. Tuks Senganga started writing in 1993, drawing inspiration from everyday issues in his immediate environment. 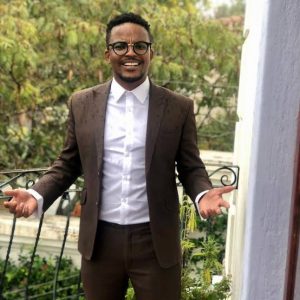 His career took off in 2005 with his debut album Mafoko a me. This was the album that earned Tuks the Best Hip Hop Album Award at the 12th Annual MTN South African Music Awards (SAMA).

Tuks Senganga (as he is known by fans in all corners of the globe) started writing poetry at the age of 12 having drawn his inspiration from his daily experiences of having grown up in the Bophutatswana homeland during the apartheid regime which was later re-established as the North West Province in South Africa. However, it was in high school that he started harnessing his hip hop skills, at a time when Hip Hop was still a taboo in South Africa.

In 2005, with the rise and rise of the Motswako movement, arrived with the now classic debut from Tuks which was titled .Mafoko A Me (My Words).

The album had already received major reviews and a number of singles had been on high rotation on all national radio stations before its release. Mafoko A Me went on to win Tuks his first SAMA for Best Hip Hop Album.

In 2006 he released his sophomore MC Prayer which was certified gold four months after its release. The production style and quality was leaps ahead of Mafoko A Me and the leading single “Monate Thwa” saw the album flying off shelves, and another SAMA nod in the form of a nomination for the Best Hip Hop album and a Metro FM Award win tagged along on Tuks’ journey as a respected hip hop lyricist.

He took a two-year break from the industry to work on his business interests and came back in 2008 with the thought-provoking third offering, Monopoly which was influenced by several conspiracy theory documentaries.

In his story-telling form, he goes on to say : “There is something wrong with the world and the way that people are controlled by the media, by music, belief systems and by religion”, he adds “this album is ear-friendly, with a pinch of the truth.

It’s not about the industry. I’m taking it a step further. I’m talking about the faces behind the industry”. With the two-year break that he took, he started working on his own record label, June/July Productions.

The company was founded in 2004 and has done wonders for the budding business man and Tuks now runs his own artist and Events Management, communications, Publishing, and music production house and released Monopoly, his third album under June/July Productions, partnered with EMI records.

In 2010, he independently released Tshwanelo which was a big shift from the sounds that we had been accustomed to, from Tuks. Its leading single, which is also the album title, topped charts across the country before the album availed itself to the public and once again saw Tuks standing his ground as a solid Hip Hop artist in South Africa. An even bigger single, “Let Me Live” found its way into the hearts of even Gospel fans. Tshwanelo was nominated for the 17th edition (2011) of South African Music Awards and Metro FM awards 2011 Edition.

2012 sees Tuks as a take-no-prisoners artist with September 2012 release of his 5th studio album: Footprints. The leading single, “Bona Fela”, is the soundtrack to a hit South African TV drama series Skeem Saam which debuted on TV screens in October 2011. He has honed his skills as not just an artist in the form of just being a lyricist, but also as a fine artist and graphic designer, as showcased in the Footprints album cover sleeve that he designed. He has also partnered up with South Africa’s biggest independent label, NEXT MUSIC, for music; media and digital distribution.

With four albums under his belt, a large following and a string of accolades to his name, it is without a shadow of a doubt that Tuks with his new album, titled Footprints is a force to be reckoned with. The steps he has taken to get to where he is now are evident in the Footprints that young artists would want to emulate.

Drop your queries regarding Tumelo Kepadisa Biography below in the comment box.