Thomas Chauke (born 5 February 1952) is a South African Xitsonga musician. Chauke was granted an honorary doctorate in African languages for the role his music has played in the development of the Xitsonga language. 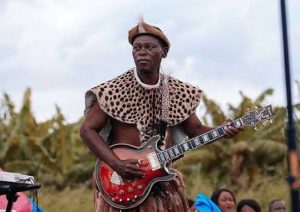 He dropped out of school at the primary level (Standard 3/Grade 5) to work at a flower firm in Heidelberg, Gauteng, in 1969. He then moved to Alexandra in 1971, where he fixed swimming pools and tennis courts in neighbouring Sandton.

While there he met his uncle, who was into mbaqanga music and played the Tsonga guitar, which he taught Chauke how to play. Chauke travelled back home in 1978 and fixed radio sets. He was already married with a child. Chauke has five wives, 23 children and 12 grandchildren.

Chauke started his band with 13 singers from a shebeen in the late 1970s. After a few months, only five remained. They performed at school halls to raise money to go to Johannesburg and realize the recording dream. Chauke signed a contract to record with GRC. Under GRC, the music was branded Nyoresh.

He moved to Wea Records, where he got a better deal and changed his music brand from Nyoresh to Shimatsatsa (“a beautiful girl”). In 1981, he recorded his first album called Shimatsatsa no. 1 under the burner name Thomas Chauke and Shinyori Sisters.

Now he hands out awards yearly in the category: Dr. Thomas Chauke’s Artist of the Year for Munghana Lonene Fm. In the course of his career, Chauke has received one diamond disc, one double gold disc, six platinum disc, 11 double platinum and nine triple platinum discs.

Chauke has an estimated net worth of $2 million.