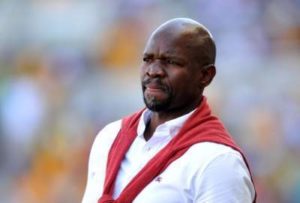 He is married to Mamoepi Komphela, and together they have three children: Nombuyiselo, Nomalanga, and Noxolo.

His football career began at NSL Second Division side Klerksdorp City and later Qwa Qwa Stars where he earned a promotion to the National Soccer League.

On the 9th of February 1986, he made his NSL debut in a 4-1 win over Witbank Aces. Komphela helped his team to a third-place finish in the league in 1992 and he was also voted the NSL Players’ Player of the Year.

He moved on to join Kaizer Chiefs playing all 34 league games and before he signed a contract overseas on 16 August 1993 moving to Gaziantepspor for the second half of 1993/94 season alongside fellow South African Tebogo Moloi. His successful career came to an end in the year 1997.

Five years after he retired from professional football, he began his coaching career with Manning Rangers F.C. in 2002. From then till 2015, he coached several clubs, working for a single season.

He joined Kaizer Chiefs F.C in 2015 signing for a 3-year contract. Komphela failed to win any major trophy and was forced to resign before the end of his contract. On the 12th of October 2020, he was announced to coach Mamelodi Sundowns by the club’s official Twitter.

He has an estimated net worth of about $500,000 which he has earned as a footballer and club manager.

Drop your queries regarding Steve Komphela Biography below in the comment box.