Ntobeko Sishi (born 1998 in Durban) is a South African actor, television presenter and musician. He is best known for playing the role of Ntokozo on Mzansi Magic’s television series, Gomora. 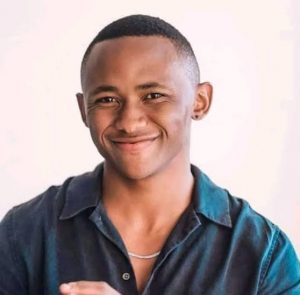 Ntobeko attended George Campbell School of Technology then went on to the University of Cape Town where he obtained a Bachelor of Commerce degree in Economics and Finance.

He also has a Postgraduate Diploma in Management, Entrepreneurship/Entrepreneurial Studies (UCT).

Prior to landing his acting role on Gomora, Ntobeko was a presenter on the SABC2 youth shows Hectic Nine-9, joining the show in May 2019.

Ntobeko landed his first professional acting role on television when he was cast as Ntokozo on Mzansi Magic’s Gomora. Ntokozo is the son of Mondli and Gladys, who chooses to seek out the kind of love and appreciation he doesn’t get at home in all the wrong places.

Ntobeko had previously revealed that he didn’t audition for the role. He stated that he was given the role by the production after he had impressed them with his performance when he auditioned for another show called Nkululelo.

Asides acting and presenting, Ntobeko Sishi is also a singer and songwriter. He dropped a new single on the 19th of June 2020 titled “IDC”.