Mmamoloko Kubayi-Ngubane (born 8 May 1978) is a South African politician who currently serves as the Minister of Tourism. She is also a Member of the National Assembly for the African National Congress (ANC). 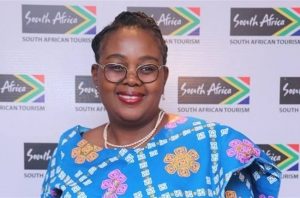 Kubayi-Ngubane lived in a shack with her family while growing up. Her mother was a domestic worker and a strong African National Congress supporter.

At the age of 17, Kubayi-Ngubane fell pregnant and had to drop out of school to deliver her child.

In 1997, she matriculated from Thusa-Setjhaba Secondary School as the school’s top achiever. Kubayi-Ngubane went on to attend the Vista University’s Soweto campus and obtained a BA Degree in Psychology and Sociology in 2000.

She also holds a Project Management Diploma from Damelin and a master’s degree in Public Administration from the University of the Witwatersrand.

She is married to Joel Sihle Ngubane. The couple tied the knot in September 2017. Kubayi-Ngubane has two beautiful children, the second was born few months after she married her husband.

Kubayi-Ngubane was first employed as a Community Developer in the non-governmental sector. She was soon employed at First National Bank as a Skills Development Specialist, and, later on, found employment in the Business Banking Division at Nedbank.

She soon worked in the public sector as a Skills Development Facilitator at the National Health Laboratory Services.

Kubayi-Ngubane has an estimated net worth of $1 million which she has earned from her career.

Drop your queries regarding Mmamoloko Kubayi-Ngubane Biography below in the comment box.