Lars Veldwijk (born 21 August 1991) is a South African footballer who plays as a striker for Suwon FC in the South Korean K League 2 and for the South Africa national football team. 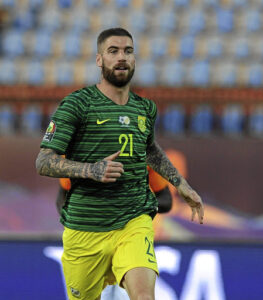 Veldwijk represented Eerste Divisie side Excelsior in the 2013–14 season, and scored 35 goals in 45 appearances across all competitions.

On 12 June 2014, Veldwijk signed for Nottingham Forest from Excelsior for a fee of £500,000 that could rise to £1 million depending on various clauses.

He made his debut on 16 August 2014 against Bolton Wanderers at the Macron Stadium as a 92nd-minute substitute for fellow striker Matty Fryatt. Veldwijk made his first start for Forest on 26 August 2014 in a 2–0 win against Huddersfield Town in the second round of the League Cup.

Veldwijk went on loan to PEC Zwolle for the 2015–16 season, during which time he scored 14 goals in 33 league appearances. Upon his return to Forest, he scored his first and only goal for the club in a 2–1 EFL Cup win against Millwall on 23 August 2016.

On 31 March 2017, Veldwijk signed for the Norwegian football club Aalesunds FK on loan, with an option to buy when the loan period is over.

On 15 January 2020, having previously been in negotiations with an unnamed club in South Africa, Veldwijk signed for South Korea’s reigning K League 1 champion Jeonbuk Hyundai Motors.

He made his official debut for the club in March, during a 2–2 AFC Champions League draw against Sydney FC, but had to wait until May to feature in the league for the first time after football was suspended in South Korea due to the COVID-19 pandemic.

After recovering from a minor knee injury, he marked his K League 1 league debut with a 93rd-minute winner against Busan IPark, before making his first start two weeks later.

On 17 July 2020, Veldwijk dropped down a division to join K League 2 side Suwon FC on a permanent deal.

Although born in the Netherlands, and having spent his formative years progressive through the Dutch youth system at club level, Veldwijk was eligible to represent South Africa through his paternal lineage.

He received his maiden call for the nation’s 2018 World Cup qualifier against Senegal in October 2016 before debuting in a 1–1 friendly tie with Mozambique the following month.

After a spell away from the team, he then returned to the national fold to feature in his first international tournament in 2019, making five substitute appearances as South Africa reached the quarter-finals of the 2019 Africa Cup of Nations.