Julius Malema (born 31 March 1981 in Seshego) whose full name is Julius Sello Malema is a South African politician and the founder and leader of the EFF.

His alma mater is The University of South Africa and he served as President of the African National Congress Youth League from 2008 to 2012. 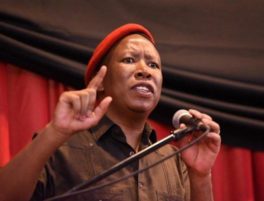 In 2014 Julius Malema tied the knot with his longtime girlfriend and together they had a son called Munzhedzi in 2016. His wife name is Mantwa Matlala and he has 3 sons.

Drop your queries regarding Julius Malema Biography below in the comment box.