Elrio van Heerden (born 11 July 1983) is a South African retired footballer who played as a midfielder for the likes of Copenhagen, Club Brugge and Blackburn Rovers, among other clubs.

He was previously also been an established member of the South African national team, representing the nation from 2004 to 2009. 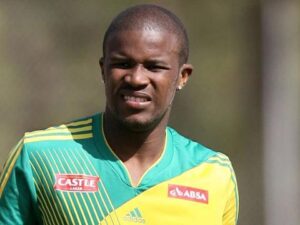 Van Heerden started his career with Glenville Celtic[1] and moved 1998 in the Soccer School of Excellence which was part of the Nelson Mandela Metropolitan University.

He came to Denmark in 2002, where he spent his first two years learning from the older players. Elrio got his debut in 2004 against AaB at Parken Stadium, and the little South African immediately wrote history with his equalizer short before the final whistle.

The goal meant, that FC København could secure the championship in the next (and last) round against FC Nordsjælland at Farum Park, which they did with a 4–2 victory.

A move to Club Brugge was made on 24 January 2006, where he spent two years with the Belgian club scoring two goals from his 67 appearances.

It was announced on 2 June 2009 that Van Heerden had agreed on a two-year deal with the Premier League club Blackburn Rovers, arriving on a free transfer from Club Brugge.

He only played two official matches for the club; in the League Cup against Gillingham in the second round, and Chelsea in the quarter-finals, both as a second-half substitute.

On 11 January 2010, Blackburn Rovers announced the transfer of the South African midfielder to Sivasspor.

On 27 July 2010, Belgian Pro League side Westerlo announced the signing of Van Heerden.

In November 2012, after having been without a club since the end of the 2011–12 season, Van Heerden had an unsuccessful trial with MLS side Sporting Kansas City.

In 2017, after five years out of the game, van Heerden returned to sign for ABC Motsepe League side PE Stars.

Drop your queries regarding Elrio van Heerden Biography below in the comment box.