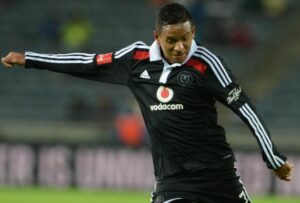 Klate was raised in Gelvandale, a former coloured township in Port Elizabeth. He started playing football for his primary school in Gelvandale at the age of eight and continued with the sport in high school.

At age 15, he moved to Gauteng to play for the Transnet School of Excellence. In 2002, he joined the Supersport United Feyenoord youth academy.

After being promoted to the club’s first team as a 19-year-old in 2004, Klate owned the left-wing position at Supersport and made over 100 league appearances for the club. He was one of the key players of United’s back-to-back Premiership wins in 2008, 2009 and 2010. In 2010, he signed with the Orlando Pirates.

Since Klate joined Pirates at the beginning of the 2010-11 season, some Pirates supporters believed him to have been the lucky charm that won the team trophies. In his first Knockout competition, the Pirates won the MTN 8 Cup via penalty shoot-outs in Durban against the Moroka Swallows. It was the first domestic trophy for Orlando Pirates since 2003.

Since then, Orlando Pirates went on to win the treble that season, picking up the Nedbank Cup (defeating the Black Leopards 3-1 at the Mbombela Stadium) and the Pirates’ third Premier Soccer League title.

The previous league title for Orlando Pirates was in 2003. In this season, Orlando Pirates played all available official games in the season and lost the Telkom Knockout in the final against Kaizer Chiefs.

Orlando Pirates also played all the finals that season. This title was the fourth in a row for Klate who had won three consecutively with his former team, Supersport United F.C.

Klate and his teammates defended the MTN 8 Trophy by beating the Kaizer Chiefs 1-0 at the FNB Stadium via an Oupa Manyisa long-range effort in extra-time.

This league title was Klate’s fifth title in a row and made him the first player ever to win the league title in five consecutive seasons.

Klate joined legends Andre Arendse and the late Ace Ntsoelengoe as the only players to win the league title five times. The record is held by former Bafana Bafana captain Neil Tovey, who has won it six times.

He made his national team debut in the CONCACAF Gold Cup quarterfinal against Panama on 16 July 2005 and has so far been capped ten times scoring one goal.