Christopher Henry Morris (born 30 April 1987) is a South African international cricketer who plays first-class and Lists A cricket for Titans.

He is known for his aggressive middle-order batting, death bowling and steep bounce as a seam bowler. 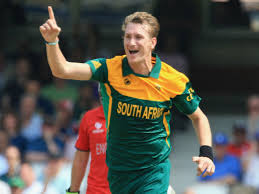 He got married to his long-time girlfriend Lisa Oosthuizen in August 2015.

He is a member of the Delhi Daredevils team, who play in the Indian Premier League.

On 21st December 2012, he made his Twenty20I debut for South Africa against New Zealand. He had figures of 3.4-0-19-2 in that game before suffering an injury.

Chris Morris gave a standout performance in the 2012 domestic league in South Africa, where he fetched 21 wickets in 12 games and his strike-rate with the bat was around 200.

On 10th June 2013, he made his One Day International debut for South Africa as part of the 2013 ICC Champions Trophy.

On 2nd January 2016, he made his Test debut for South Africa against England.

He starred in South Africa – England one day series in February 2016, making 62 off 38 balls to level the series in the 4th ODI.

On 19 February 2017, he picked up 4 wickets early in his 7-over spell in a rain-delayed 34-over-a-side game, but in the final two overs, he conceded 38 runs despite picking up 4 wickets against New Zealand.

He has an estimated net worth of $1 million which he has earned as a cricketer.

Drop your queries regarding Chris Morris Biography below in the comment box.