Baleka Mbete (born 24 September 1949) is a South African politician who served as the Speaker of the National Assembly of South Africa from May 2014 to May 2019.

Previously she was Speaker of the National Assembly from 2004 to 2008 and Deputy President of South Africa from 2008 to 2009 under Kgalema Motlanthe.

In 1976 she went to exile and she taught in Mbabane in Swaziland, and went on to work for the African National Congress (ANC) in several other African cities, including Dar es Salaam in Tanzania, Nairobi in Kenya, Gaborone in Botswana, Harare in Zimbabwe, and Lusaka in Zambia. She returned to South Africa from exile in June 1990. 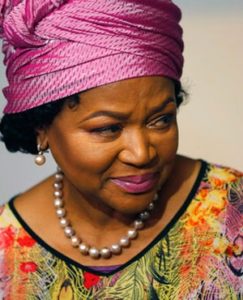 Baleka Mbete is currently married to Moses Mokgatle Khomo. She got married to him on her 67th birthday in 2016.

Prior to her marriage with Moses Khomo, she was married to Keorapetse Kgositsile, an exiled South African poet, writer, political activist and influential member of the ANC. The pair got married in 1978 but they later divorced in 1992

Baleka Mbete education is summarized below:

Mbabane political career started immediately she returned from exile, she was elected the secretary-general of ANC Women’s League, serving in this position from 1991 to 1993.

She went on to become the national chairperson of ANC  at the 52nd National Elective Conference of the ANC held in Polokwane on 18 December 2007.

On May 2014 she was nominated for the position of Speaker of the National Assembly. Baleka Mbete is summarized below: